Samsung has just unveiled a budget phablet called Samsung Galaxy Grand. It is the cheaper alternate of Galaxy Note and Galaxy Note 2. Samsung will also launch the dual SIM version of this phablet. 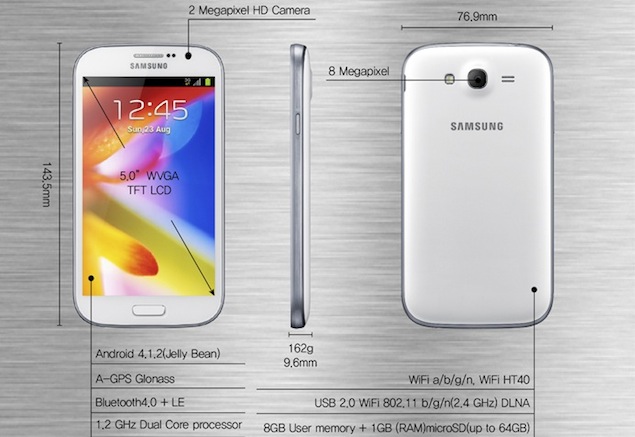 Samsung Galaxy Grand features a 5 inch display with 800×480 pixel resolution. It is powered by a 1.2 GHz dual core processor with 1 GB RAM. It comes with Android 4.1.2 Jelly Bean operating system on the board TouchWiz Nature UX running on top. It also features multi-view, smart alert, S-Voice and popup videos. It features a 8 megapixel camera and a 2 megapixel front camera for video calling. DUAL SIM version of this phone will be dual active that allows users to receive calls on one SIM number while talking on the other. Connectivity features of this smartphone includes WiFi, 3G, USB 2.0, Bluetooth 4.0 + LE, A-GPS, Glonass and DLNA. Samsung Galaxy Grand is powered by a 2100 mAh battery.

The Samsung Galaxy Grand will be available in both single-SIM (GT-I9080) and dual-SIM (GT-I9082) variants. Nothing about price and availability has been disclosed by the company.