Samsung Galaxy Note II up for pre-order in India for Rs 38,500

Samsung Galaxy Note II that was announced few days back is now available for pre-order in India. It can be booked via online on Infibeam.com for Rs 38,500. 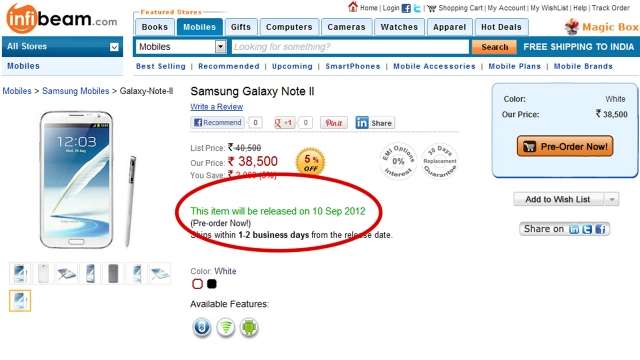 On this online retailer, Galaxy Note II has been listed as “coming soon” and it is written that “The item will be released on 10 Sep 2012.” Company also promised to ship the item within 2 business days from the release date.

Samsung galaxy Note II is the better version of Samsung Galaxy Note that was announced in IFA Berlin on 30 Aug 2012. It features larger 5.5-inch Super AMOLED multitouch screen with Gorilla glass 2 protection and Touch WIZ UI. It is powered by a Quad-core 1.6 GHz Cortex-A9 and runs in Android 4.1 Jelly Bean operating system. It features a high quality 8 megapixel camera with LED flash along with a 1.9 pixel front camera for video calling.

The Samsung Galaxy Note II is available in Marble White or Titanium Gray colour options. You can order galaxy Note II from infibeam.