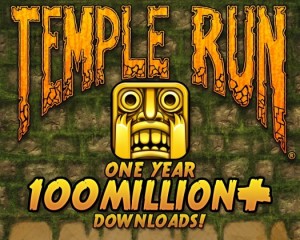 If you are new to this game and do not know what is it, i want to say that you have missed the most amazing game of this year. In this game you will have to escape with a stolen idol. There are many amazing powers that makes the game more exciting.

Temple Run has completed its one year few days back and now it is aiming to reach up to few more milestones. Cofounder of Imangi Studios Keith Shepherd said that, “ We never thought Temple Run will be a huge hit among smart device users”.

According to data revealed by the company, Temple Run has been played more than 10 billion sessions which is really unbelievable for the company.

If you also want to enjoy this game, you can download it from the link below.