Yesterday, Karbonn Mobile has announced some future plans and some new products for Indian Market. Karbonn will invest Rs. 445 Crore in promotion and product development in next two years and it also expects to touch Rs 3,500 crore revenue milestone by 2013-14.

After these announcements, it also announced a new low cost tablet for Indian Market. This tablet is called Smart Tab 1 which will be available for Rs. 6,990 only. 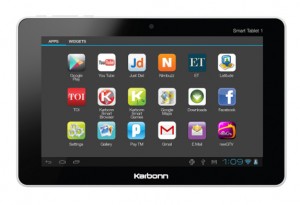 Karbonn Smart tab 1 comes with good hardware and software specification at this cost. Smart Tab 1 is powered by a powerful 1.2 GHz x-Burst processor. It runs on Android 4.0.3 (Ice Cream Sandwich).

This tablet also comes with a 1 GB on board storage which is not enough. So its internal storage is expandable upto 32 Gb via microSD card.

Company also have plans for some more smartphones and tablets in India.

“We are planning to launch four new smartphone and three new tablets in next three months. Karbonn will be first Indian company to launch smartphone of Google’s Icecream Sandwich platform which is next version of Android after Gingerbread,” Karbonn Mobile Executive Director Shashin Devsare said.