After the announcement of Google Nexus 7, most of the tablet lovers wants to own this. Few days back, Google has launched Google Nexus 7 tablet in USA, UK, Canada and Australia. Other countries including India is waiting to get this tablet. 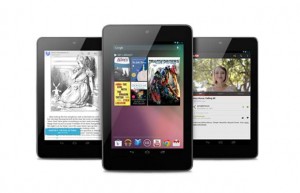 Other online retailer Indiatimes shopping has also listed 8 GB version of Nexus 7 as ‘In Stock’ and is taking pre-orders for Rs. 16,952.

Official launch of Google Nexus 7 tablets is set for the month of October in India.

Google Nexus 7 is powered by a 1.3 GHz quad-core Tegra 3 processor with a GeForce12 core graphics processor and 1 GB RAM. It features a 7 inch display with 1280 x 800 pixel resolution.

It also has NFC and runs on latest Android version Android Jelly Bean (Android 4.1) with intelligent keyboard that predicts words as you type them.

This tablet does not have 3G connectivity options. connectivity options include Wi-Fi a/b/g/n, Bluetooth and NFC capabilities. It comes with a 1.2 megapixel front camera for video calling. Camera can also record HD 720p videos. It also supports offline voice recognition for typing and other inputs and with 18 new input languages, and accessibility improvements.