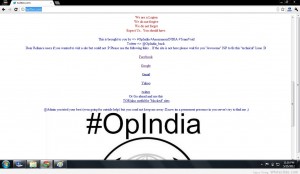 Reliance Communication’s website blocking and filtering server has been hacked by Anonymous. Few days back Anonymous announced operation india and warned Indian government to stop blocking websites on Internet. They announced this operation after court ordered to block torrent websites and some video websites.

Reliance communication is first to block video websites like Vimeo.

Anonymous REVENGE / WE OWN YOU

Told you not to mess with free speech and lesser with Anonymous
Government of India, you know what you did wrong. you caused out twitter account to be blocked now we will show you what anonymous is capable of doing.
———————————————-
We give you 24Hours at maximum to give our twitter account back and apologize
Give @OpIndia_Revenge BACK
———————————————–
IF NOT
We will unleash hell and shiver on you
Greeting government of India, you were bad really bad. One of the worst governments the world has. Yet we tried our best not to go too tough on you, and then you decided to cross over us, bad guys bad idea.
We tried to do a slow, non violent protest and government decided to cover out mouths we will not sit idle while our freedom is take away. We will continue our non-violent protest and guess what you will never beat us, ever.
When we started to speak truth, the government of India forced our online twitter account @Opindia_revenge to be suspended.
Dear People
People We for 1 entire week attacked government websites, run by your money and no one in your government cared, then we decided to hit the Rich guys in the entertainment and IPL and Reliance and your government sprang into action. Shame on this government. It is time you people realized that this government don’t care about you. If we had attacked what belong to you they wont have minded. But if at all the smallest scratch appears on the rich and elite they are up and ready to act. Time you throw away these puppets of the rich and replace it with a new system that respect the constitution.Here is a list of all sites block by the governement
and reliances Injustice !!
Opposition
Don’t get ready to jump up and down and make a big show, because we know you are worse that what the word worse can explain. You and the ruling parties share profits in every corruption and then play a drama to fool the people. People realize that they are nothing but the ruling party itself just making mockery of every system that is in place and the people who voted them to power. you guys have no right to act as saviors of people.

MEDIA
You are meant to be the 4th estate of democracy. The supporters and guardians of people and their rights but you have failed and we don’t tolerate the kind of actions you are taking now. plotting with the government that is trying to abuse its own people and help corporations steal and befit from the weakness of your people. Media you cover us or not we will do what it takes to fight for peoples rights something you guys are scared to shit to attempt. If you can then show us you are not advertisement sucking leaches and tools of the government to enslave the people. We may have expected the US media to behave this way but not you guys who talked about not being influenced by anyone. We only DDoSed RBI, and contrary to what they think, it was down for a long time this is a message to TOI that is not true we only prevented it from being accessed and we kept it down.EXPECT US

This is brought to you by => #OpIndia #AnonymousINDIA #TeamVoid
Twitter => @OpIndia_back
Dear Reliance users if you wanted to visit a site but could not 😛 Please use the following links .. If the site is not here please wait for you “Awesome” ISP to fix this “technical” Issue 😀 Facebook Google
Gmail

@Admin you tried your best (even going for outside help) but you coud not keep me away :D,now im a permenent presence in you server’s try to find me 😉