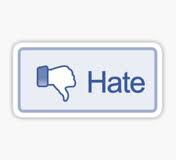 According to the post on popular technology blog, TechCrunch, Facebook is thinking to add Hate button. But there is a confusion on the name whether the new button should be called “Hate” or “Dislike.”

According to the S-1 filing of Facebook, Facebook users are generating more than 2.7 billions likes and comments. And adding a hate button will double this number.

Like button is a huge part of Facebook’s revenue which had 1 billion Likes across the web in just the first 24 hours of launch. Sources at Facebook say Mark is estimating 2 billion Hates on the first day.

Facebook is also considering some other buttons that are the “Meh”, “Love”, “Who Cares”, and “+11″ but nothing is sure.
Hate button is not sure and is under heavy debate inside the social networking company. While the product and sales teams favor the idea, many inside Facebook oppose it.

But there is no official comment on this report or hate button.