Google hangout is the key feature of Google+ and Google is trying make it more better. Google already added several features to Hangouts that weren’t available to all users by default. Now,  Google has made another update to hangouts. Now users can make phone called from hangouts. These calls are free in US and Canada, and rates are very low for international calling.

This is the third big integration to the Hangouts. Screen sharing feature was the first which enables users to display a live view of their entire desktop. Google Docs integration was second.

“In the past few months, we’ve graduated two widely used features from Hangouts with extras to the main Hangouts experience: screen-sharing and Google Docs,” Google explained. 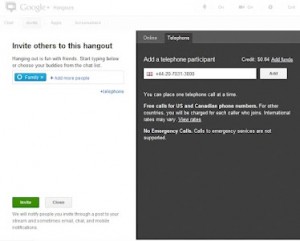 “Today, we’re excited to announce that we’re graduating a third and very popular feature — the ability to call a phone number from Hangouts. Calls to the US and Canada are free, and international calling rates are super, super low,” it announced.

To make a phone call, invite a person to the chat and then click on +telephone link. Now you will see a telephone tab to dial number. After adding a number, click on add and your call is connecting.