Sony has launched its much awaited Sony Tablet P in India which is now available on all Sony retail stores. This tablet is also available on all online retailers including Flipkart, Ebayindia and letsbuy. 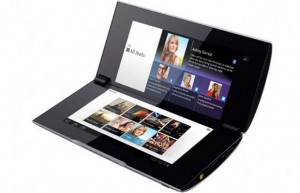 This tablet has a folded design as calmshell based phone but it is bigger in size. It features a full fledged tablet featuring dual 5.5 inch display Sony Tablet P is powered by dual-core Nvidia Tegra 2 mobile processor and runs on Google Android Honeycomb operating system. Tablet P also boasts a customised interface that allows use of both screens combined and individually.

It has a 5 MP camera along with a 0.3 MP front camera for video calling. It comes in Wifi only and 3G+Wifi models.

It comes with 4 GB internal storage that is enough for most of the personal work. Users can also expand the storage upto 32 GB via microSD cards.

The price of the device with both 3G and WiFi connectivity has been kept at Rs 36,990