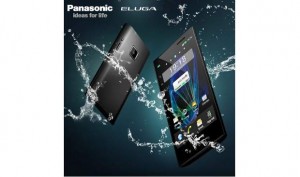 Panasonic is going to hit the market with its new Android smartphone which is a waterproof and dustproof smartphone. This Japanese electronics giant which exited mobile phone business few years ago, is now ready to compete in the smartphone war.

This new waterproof smartphone is called Eluga which has an attractive design. Eluga is powered by 1 GHz dual-core processor (OMAP4430) and comes preloaded with Android Gingerbread 2.3.5. This smartphone has a 4.3 inch qHD (960 x 540) display. It has a 8 MP camera.

Although the phone comes with Android Gingerbread but Android Ice Cream Sandwich update will be available for this handset by mid this year.

The smartphone can also control Panasonic branded TVs, Blue-ray players, Home theatre and other devices. It also has a sharing function called Swipe and Share which will allow you to share images and videos with a TV or a cloud-based receiver wirelessly.

The smartphone will initially be launched in European markets in March this year. And we can expect the launch in India soon