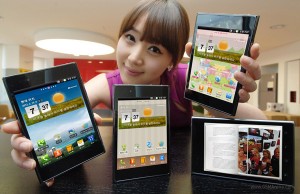 LG Optimus Vu smartphone is powered by a fast 1.5GHz dual-core application processor, along with 1GB of RAM. Smartphone also has 32 GB of internal storage but no option for microSD card. This phone also features a 8 MP camera with support for HD video recording, as well as with a 1.3MP camera on the front which allows users to make video calls.

The handset also sports support for LTE networks, along with 3G, WiFi and Bluetooth connectivity. Wi-Fi Direct, DLNA, and HDMI capabilities were also included into the mix.

Smartphone will with with Google’s Android 2.3 Gingerbread operating system on board. But we can expect the upgrade to ICS soon after the launch.

Company has not revealed any thing about the price and expected launch but handset is set to make an appearance at the MWC 2012.