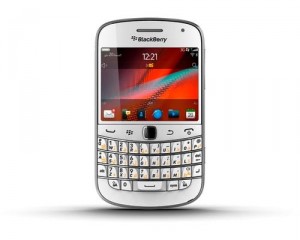 The sparkling white phone BklackBerry Bold 9900 is available at a price tag of Rs 33,360. It has built-in support for NFC (Near Field Communications), a new technology that is enabling many new and exciting capabilities, including the ability to make mobile payments, pair with NFC-enabled accessories or read SmartPoster tags with a simple tap of the smartphone.
Features of Pure White BlackBerry Bold 9900 smartphone: