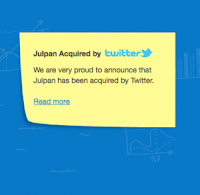 Twitter has just announced that they have acquired Julpan. Julpan analuze social information that is shared on social services like Twitter. Now the team of Julpan will work in the twitter’s new yorl office.
Julpan was the startup of Ori Allon who had created the search algorithm called Orion. Google acquired the exclusive rights to Orion in 2006 and Allon worked in Google till 2010.
Allon left Google in 2010 to found a new startup, Julpan. Allon will become a director of engineering at Twitter. He writes on Julpan’s site:


I am very proud to announce that Julpan has been acquired by Twitter.


We founded Julpan more than a year ago. In that time we’ve created innovative, early-alpha-stage search technology that analyzes social activity across the Web to deliver fresh and relevant content to users.


Twitter houses an industry-leading engineering team that is tackling some of the Internet’s most interesting opportunities. With more than 230 million Tweets per day on every subject imaginable, Twitter gives us a chance to make an even greater contribution toward instantly bringing people closer to what is most meaningful to them. We look forward to joining forces with Twitter’s engineering team to explore how we can best integrate and optimize Julpan’s innovations.


I’d like to personally thank the talented engineers, architects and designers of Julpan. I couldn’t have asked for a better group of people with whom to invent some of the world’s best social search technology.