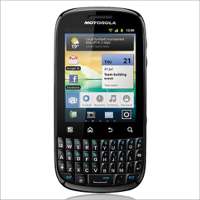 Motorola is going to launch a new Android based smartphone in India. It is expected to launch on Monday or tuesday. The name of the smartphone is Motorola Fire, which is a touch and type qwerty phone. It has a 2.8 inch capacitive touchscreen. This phone runs on Android 2.3 version (Gingerbread), which is optimised for better user interface, and support for Indian languages like Hindi. This smartphone is powered by 600 MHz processor.
It also comes up with some smart features like  3G (speed of up to 7.2 Mbps), WiFi, Bluetooth and GPS. It has a 3MP camrea with  fixed focus unit without flash The phone supports external memory of up to 32 GB, and is powered by a 1420 mAh battery, which according to the company gives a 2G talk time of up to 7 hours in ideal conditions.
This phone is already available on Flipkart.com for near about Rs 9,000.