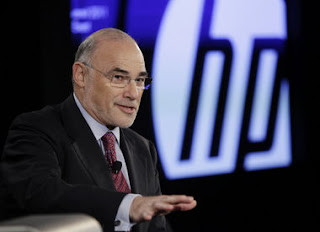 Recently fired Hewlett-Packard CEO Leo Apotheker is walking away with more than $13 million in cash and stock as shareholders stew over a rocky reign that saw the technology company‘s market value plunge by nearly $40 billion in just 11 months.

The parting package spelled out Thursday in a regulatory filing wasn’t surprising. Most major companies guarantee generous payments to ousted executives as long as they aren’t dumped for unethical or criminal conduct.

Nevertheless, the details of Apotheker‘s jackpot probably won’t soothe the hard feelings still lingering over Hewlett-Packard Co.‘s decision to hire him in the first place.

Apotheker replaced Mark Hurd, who was ushered out in August 2010 in a scandal triggered by unproven allegations of sexual harassment. Hurd’s severance included a $12.2 million cash payment and $30 million worth of stock that he got by exercising options after his resignation. HP’s stock price more than doubled during Hurd’s five-year stint as CEO, adding about $50 billion to the company’s market value.

HP’s shares fell by 46 percent during Apotheker’s tenure, which ended Sept. 22. The shares closed Thursday at $23.78.

Despite the missteps that got him fired, Apotheker still will get a $2.4 million bonus later this year under HP’s “pay-for-results” plan, according to a company filing Thursday with the Securities and Exchange Commission. Apotheker also will receive $7.2 million in severance payments over the next 18 months and the vesting rights to 156,000 shares of restricted stock currently worth about $3.7 million.

The value of Apotheker’s other stock awards will depend on how the company fares in the next few years. Apotheker, who moved from Europe to work at HP’s Palo Calif. headquarters, apparently will be watching how the company does without him from abroad. HP also is paying his relocation expenses to France or Belgium, and will cover up to $300,000 on any loss that he suffers from the sale of his California home.

The second guessing about Apotheker began almost as soon as HP announced his hiring a year ago because his previous employer, business software maker SAP, had dumped him as CEO.

HP is resting its turnaround hopes on Apotheker’s successor, former eBay Inc. CEO and unsuccessful California gubernatorial candidate, Meg Whitman. HP set Whitman’s salary at $1 annually, but she could earn a bonus of up to $6 million, according to the company’s SEC filing.

Whitman can afford a small salary because she became a billionaire during her time at eBay. She is worth about $1.3 billion, according to Forbes magazine’s latest rankings. Several other of Silicon Valley’s current and past billionaire CEOs, including Google Inc.’s Larry Page and Apple Inc.’s Steve Jobs, have insisted on capping their salaries at $1.

The company also granted 1 million stock options to its executive chairman, Ray Lane, who joined HP’s board when Apotheker was hired. Lane is taking on more active role in steering HP now that Apotheker is gone.