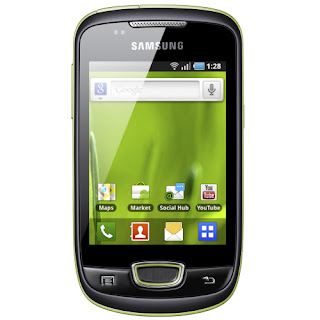 Samsung Galaxy Mini is the low-budget smartphone launched by Samsung mobile. It is about to reach Canadian shores soon via Mobilicity. phone has just been spotted by the guys over at Mobile syrup, but no release date or pricing options have been revealed yet.

Apparently, the Galaxy Mini was spotted at a Samsung rock concert in Toronto, inside one of the demo booths, stamped with the “Coming Soon to Mobilicity” tag.
Samsung galaxy mini has already been launched on the market in multiple regions, including Europe and United States. However, the phone is known as Samsung Dart in the U.S. and available via T-mobile,whereas in India the phone goes by a different name, as well, Samsung Galaxy Pop.
There is a good facility for photography lover. The phone is entry-level smartphone, the Canadian version will be delivered with an improved 3-megapixel camera instead of the Dart’s 2-megapixel photo snapper, which is not available at T-Mobile.
Samsung Dart is equipped with a low-performance ARM 600MHz processor and runs on Android 2.2 Froyo, with slim chances to be update with a newer Gingerbread version of the operating system. The Galaxy Mini features a small 3.14-inch QUGA capacitive touchscreen with 262K colors support, 240×320 pixels resolution, accelerometer sensor for auto-rotate, ToucWiz v3.0 UI, Skype text input method and proximity sensor for auto turn-off.
The phone is powered by standard Li-lon 1200 mAh battery that should provide up to 570 hours of standby time or up to 9 hours and 30 minutes of talk time.
So, enjoy this new standard phone and make your life comfortable and wait for ‘Next is what????’.