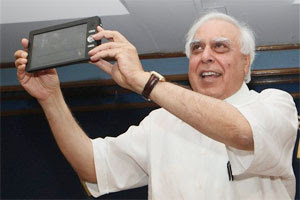 Just forget HP Touchpad which is available at $99, here is a new tablet available for $99 in India which is Launched by Lakshmi Access Communications Systems Pvt. Ltd., the 4.3-inch Magnum Pepper Tablet PC runs on Google’s Android operating system.

“On average, every consumer has access to three screens on a daily basis, starting with the TV, the computer screen and finally the mobile phone. However, there are a number of situations where consumers would not be in a position to access one of these specific screens despite having a need or want. This is where the LACS range of Touch Media (TMD) & Touch Infotainment (TID) Devices allow consumers to have all of the above screens in a single device operating on a single platform, without necessarily replacing any of the 3 gadgets themselves,” says Sharat Satyanarayana, the company’s director of marketing and services.

The 3 GB tablet will work on wireless Internet and 3G networks. It has a 800 Mhz processor and 256-MB RAM. Following Airtel’s release of $220 tablet PC magiq, this tablet is bound to pose tough challenge to all the leading tablets in India from iPad2 to Galaxy to Reliance 3G and even Rim’s BlackBerry Playbook.

Some basic features of Pepper M74V :

There is no doubt that we Indian, increasing our market day by day and some day we rule the market.