Nokia launches Symbian based E6 and X7 in india 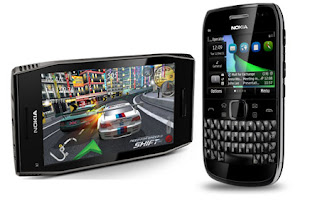 Today, Nokia has announced the launch of 2 new handsets powered by symbian in Indian market. These are Nokia E6 and Nokia X7 smartphones.After the launch of these devices some weeks ago, now it comes to India just because Nokia sees the Indian market as one of the most important markets for distributing its Symbian-based handsets.

Viral Oza, Marketing Director of Nokia India commented, “We aim to further consolidate our leadership position in the Indian smartphone market” and also further added that Nokia will start shipping the Nokia N8s, E7s, C7s and the C6-01s with the new Symbian Anna software update during the period of July to August. The Symbian Anna update is made available for downloaded to all existing Nokia users through the OTA software updater or via Ovi Suit. Over the next year Nok

X7 wraps in a 4″ HD display and said to be a gaming device with 8 megapixel camera and many more to download via OVI stores. E6 is made for business class users and Equipped with a high resolution display, users gain access to Microsoft Exchange, Microsoft SharePoint and Microsoft Communicator Mobile.